Location/ Directions:  Hotel is located at the intersection of I-75 and the North Central Ave exit. Exit 239 on I-75. 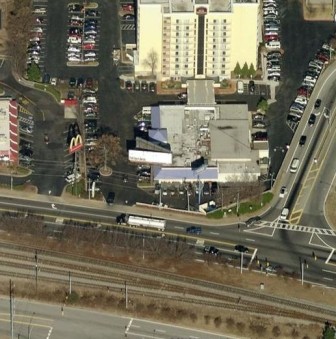 Railroad View:   Excellent View from mid-level to high floors on the south side of the motel. Rooms on the east and west sides will work as well, but south side rooms have a direct view of the railroad.

Photo Comment:  The aerial photo shows the Best Western hotel at the top of the image (tall light colored building), the railroad can be seen along the bottom on the picture.  Out of site to the right of this photo was Ford's former Atlanta Assembly Plant (1947-2006, demolished in 2009).  The last Ford Taurus rolled off the assembly plant in 2006.  The last Taurus went Chick-fil-A restaurant chain founder Truett Cathy, who has credited the success of his first restaurant in Hapeville to business from Ford workers across the street.  That very last car is located in his auto museum of his chain's corporate headquarters in Atlanta.  Just east of here, the double track mainline becomes single track.  A Norfolk Southern freight yard is located several miles west of the hotel.