Location/ Directions: Located just off I-29 at Highway 30.

Railroad View:  Good distant view.  2nd floor rooms will keep you above autos in the parking lot.  Note that all rooms on the railroad side (north side) are 1-Bed Rooms (odd numbered rooms). Rooms with 2-Beds are located on the south side of the building.  From the south side rooms; in the very far distance you can see trains on the north-south line, those trains are too far to get pictures or videos of them. Windows do open with a screen for protection, you can hear the train horns of passing trains.  At night its too dark to see trains from the motel.

Notes:    The motel office is located in Penny's Diner, sounds odd, but this is a nice motel, in a quiet setting.  Missouri Valley is a good overnight location for fans that railfan the Union Pacific via US-30 between Clinton, Iowa and North Platte, Nebraska.  Besides the diner, there is also a Arby's, Subway, and Burger King within walking distance of the motel. 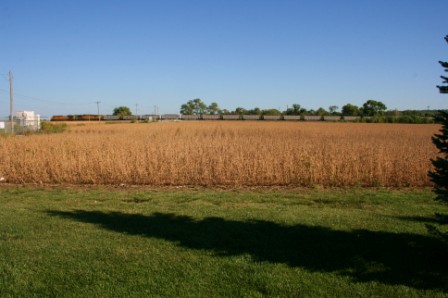 Top photo: A Union Pacific & Norfolk Southern locomotive power a westbound freight.  Historically, most trains on this line are westbound trains although I did see some eastbounds during my last visit.  The Union Pacific crews refer to this line as "the shortcut" between Iowa and Nebraska.

Second Photo:  A westbound empty hopper train is photographed from the motels parking lot.  This is a similar view you would get from the building which is behind me.  To my left is Penny's Diner which makes some great food and also offers excellent railroad views of passing trains right from your table.  Do to my need for 2-beds in the room, I wasn't able to get a room with a railroad view at this motel.

Bottom photo: Taken with a 24mm lens from the window of room # 211 in the early morning hours of a cool September morning, shadows are still on this eastbound freight as it passes the motel and Penny's Diner seen to the left.  Gusts of the hotel receive free breakfast at Penny's Diner, its a good deal!