Railroad View:  Excellent.  Book rooms on the rear of the building above the 4th floor (above the tree line).  Trains are about 500 feet away; the BNSF TransCon has over 70 trains during a 24-hour period.  Train's blow their horns constantly through town.  A sliding door and balcony on each room make watching train's even more exciting.  Don't expect to get much sleep - this is a railfan's "All Nighter" hotel.  Photographs & video are ideal from the balcony!

Railroads past Hotel:  BNSF Railway (Former Santa Fe mainline) - 70% of the trains are intermodal and Auto-Racks, general freight makes up the rest.  Coal trains usually use the former BN mainline down the street.

Notes:  Galesburg is the crossing of the BNSF Santa Fe mainline & the BNSF BN mainline.  Between the two, there are over 110 train's daily through Galesburg.  There is a small town park at the junction of the two lines; this is the place to be if you want trains.  The BN line hosts all the Amtrak traffic as well as most coal trains through Galesburg.  Merchandise train's can be found on both lines.  Intermodal and Auto-Rack trains generally run only on the Santa Fe line.  The Amtrak station located on the BN line is also another fine place to watch trains.  Galesburg Yard and locomotive servicing facility can also be seen from public property via a highway bridge over the yard.  Old-timers that are familiar with Galesburg, Sorry, the Santa Fe station (former Amtrak until 1997) has been torn down by BNSF a few years back.  As sad as it is, it has improved the view from the hotel.  The scrap yard west of the station is also gone.

Comments:  A long time favorite railfan motel, although I do have to mension the hotel is no longer in fine condition as the Ramada folks use to keep it.  The pool is closed, and the whole building needs a refreshening.  During my last few visits, rooms were not kept to the condition that I was use to.  The staff and manager were fine during my last visit, but the property is now under new ownership.  I have not visited the hotel since its become the Broad View Inn.  For us railfans - its all about the trains! I've read the recent reviews on TripAdvisor, with the exceptions that one writter had about bed bugs, all other negitive reviews sound true from my past experences.

Picture Comments: Below Left: Taken with an 18mm lens from the balcony of a double stack train.  Picture above right: taken with a 55mm lens of an eastbound BNSF train.  Zoom lens photo can get you an up close shot of an engine / railcar.  Video is great from the hotel, what's better then the view itself is the constant train horns through the town.  It’s unique to Galesburg! 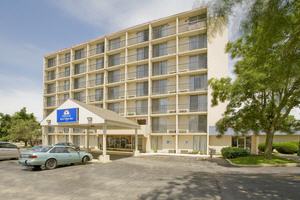