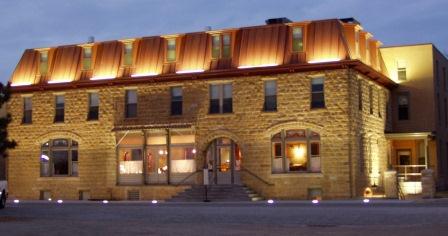 About Hotel: 3-Floors, 28-Rooms, Interior Corridors, Restaurant, Bar/Lounge, Air Conditioning, Free High Speed Internet ( WiFi ), Free Breakfast, Free Parking. An historic hotel with modern amenities. Welcome to the wonderful Midland Railroad Hotel. You will find it a delightful blend of historic charm and modern convenience--a place welcoming weary travelers and comfort seekers for over 100 years. When the Midland Railroad Hotel was built in 1899, it was the most magnificent facility in the Midwest, with 28 wonderfully appointed rooms. The Midland Railroad Hotel continues that tradition today, with every room completed renovated and restored back to its original glory, complete with tasteful decor and mission style furnishings. The Midland Railroad Hotel is on the National Register of Historic Places and has won the Kansas Preservation Award for the careful attention given to detail while restoring the facility back to its original state. The trains that once took travelers to the historic hotel are still in operation, with railroad cars passing through this community several times each day--making for an even more memorable experience as yo...u step back into time.

Railroad View: Excellent View!  Any room on the front of the hotel will provide a great railroad view.  East facing rooms should also be ideal.

Comments: This is a historic hotel/building.  This motel has not been rated by RailfanMotels.com

Hotel History: Originally built in 1899 by Philadelphia transplant Wilke Power as the Power Hotel, the Midland Railroad Hotel was once considered among the premier hotels in the Midwest. A magnificent, limestone building rising three stories high and comprising 28 elegant rooms—and lit by the day’s latest method, acetylene gas—it was popular stop along the Union Pacific Railroad between Kansas City and Denver. Businessmen stopped there so often to show their wares, in fact, that the hotel’s basement became known as the Sample Room (and still is today).

After a November 1902 fire gutted the hotel, it was restored and reopened as the Midland Railroad Hotel. Rebuilt with modern heating, it maintained its status through the roaring 1920s as one of the finest, modern-day hotels in the region.

Once the Great Depression hit, the hotel suffered with the rest of America, making ends meet by raising chickens on the third floor to serve to dinner guests. Over the next several decades, the Midland continued to operate, even serving as a backdrop for many scenes in the 1973 film “Paper Moon,” starring Ryan O’Neal and daughter Tatum.

The Midland’s previous owners, John and Agnes Hill, closed the hotel in 1978 after 18 years in business. Then in 1997, the Wilson Foundation purchased the historic building for $35,000, launching six-year, $3.2 million renovation, earning the organization a Kansas Preservation Award for its painstaking restoration.

The Midland Railroad reopened in 2003 to its 1920s glory and is listed on the National Register of Historic Places.

Photo Comment: A photo taken from Avenue D in downtown Wilson looks west down the Union Pacific Railroad.  This is a single track main with a siding in town.  The Midland Railroad Hotel can be seen to the right (building with red roof).
Copyright RailfanMotels©2022