Hersey, PA - The Suites at Hersey  (Not Rated) 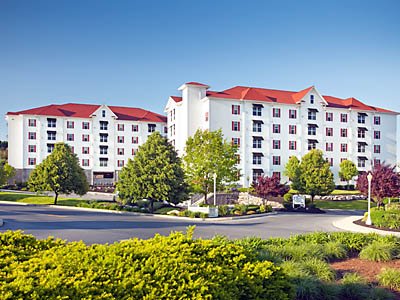 Railroad View: Excellent View.  Get a room on a high floor in the building closest to the railroad.  South or east sides of the building are needed for a railroad view.  Trains are noisy, they blow their horn for a crossing west of the motel.

Railroads past Hotel:  Norfolk Southern.  Expect about 45-train's during a 24-hour period on NS's Harrisburg Line.

Notes:   A line copied from an advertisement reads, "  You will also want to check out the Cocoa Train observation tower and watch the trains chug by carrying cocoa beans and sugar to the chocolate factories".  In reality, they only chugging you will hear will be from a GE diesel, and
how many folks are really going to mistake a coal train for a cocoa bean train?

Comments:  This motel is said to be a Timeshare Resort motel. Aside from people complaining about the train horns at night, this motel has favorable ratings on the internet.  This motel has not been rated by RailfanMotels.com

Photo Comment:  Left Photo: Aerial view shows how close the motel is to the railroad.  Rooms on the closest building to the tracks is best for a view (there are 3 buildings).  Right Photo: A guest shot this picture of the end of a eastbound Norfolk Southern freight.  Notice the fence they are installing around the motel, it may not be possible to watch passing train's from ground level with the new fence.