Railroad View:  Good View.  Either side of the motel should offer a railroad & a bay view.  Internet reviews report loud train horns from frequent trains.

Left: This aerial view facing west shows a merchandise train pasing the Silver Cloud Inn.  Rooms on the east side of the building (the side you see in this picture), maybe the better side to view the railroad, less tree's.

Railroad View:  Excellent View.  Any room on a high floor on the north side of the building will offer a railroad view.

Photo Comment:  The Aerial photo shows LaQuinta Inn circled in yellow.  The railroad tracks can easily be seen across the way.  The north track is a lay-up track for Sound Rail commuter trains.  Out of view to the top of this photo is BNSF's Tacoma Yard, trains maybe seen from high floor rooms. 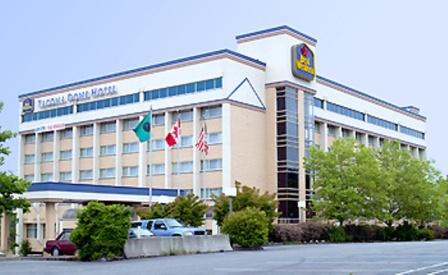 Railroad View:   Excellent View.  A high room on the north or east side is best.  Sound Transit Tacoma Dome Station is within walking distance from the motel, and can be seen from the rooms.  Amtrak's Tacoma station is also nearby.

Photo Comment:  The aerial photo shows the Best Western motel circled in yellow.  Just out of view to the bottom of the photo is Tacoma Dome.  The railroad tracks are marked in red.  The Tacoma Rail (short line) and Sound Transit commuter rail line is the closer set of tracks to the motel.  A block further is the Sound Transit Light Rail line.  About 2-block beyond the light rail line is BNSF's Tacoma freight yard.  With luck, you maybe able to see some BNSF trains as well.
Copyright RailfanMotels©2022